More Test & Tune time for the KPTuned ALLMOTOR GTI! Still trying to figure out the clutch and the tubes, but the car is coming around. No changes since IMSTAR. Weight ~2450#

Here’s where things get goofy.. burnout, stage and launch 1.79 60′ but it breaks up before the 1-2 shift, I let off and get back in it, sputtering. Running out of gas, whoops. Try to limp it to the pits but I don’t quite make it. Luckily I bring gas, unfortunately it’s not in the car!

With the wasted time of dealing with the fuel fiasco, and a few oil downs finally ready to run again. Car takes off spins the 1-2 shift, miss my 2-3 shift a bit and end up with a 13.203@105.58 best ET and trap missing a gear, and beating my best time at MIR.

There ends up being a few more oil downs and a bike wreck so I pack it in early. The car still has some ET left once I get the launch where I want it. I think it has a .77-75 as it sits.

After finally losing a long battle with a stock clutch at VW Waterama, a few upgrades were planned. A Race Shop/ClutchNet clutch setup was installed with the previous flywheel, Schrick 268s were added to get some more top end, and tubes were added to the slicks to combat some leaking.

Luckily, all of this was done in the nick of time to go racing at MIR’s
IMSTAR event on Sept 7th.

The car is prepped for the Street Stock class which features 4cyl, 2 rotor and 6cyl naturally aspirated entries. All vehicles have to retain a stock engine for that year vehicle and feature a full interior minus rear seat.

Unfortunately, testing time before the event with the new setup was short so there was only one pass available for practice before qualifying. The car came out of the hole slow due to a very bad bog and ran 13.7@100

Second round got much more interesting as the ladder put me against another VW driver, Matt Ivan and his 95 GTI VR6. Both of us were within .1et all day and cutting decent lights so it would come down to a real drivers race.

Matt went on to win in the semis and get a run for a loss in the finals. Congrats, Matt on the runner up!!

All in all it was a good event, but some more seat time on the new setup will yield some more ET. 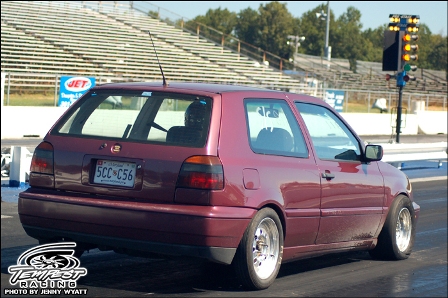